I just found out I’m HIV positive
HIV Basics
HIV Transmission
Do I have HIV or need to test?
HIV Testing
HIV Treatment

Do I have HIV or need to test?

How soon can I take an HIV test?

This question usually refers to how soon after exposure can someone test for HIV.

A negative test after four weeks then needs to be confirmed with a second test three months after the risk. This is because some people take longer than four weeks to generate an antibody response.

This includes after a sexual assault or after a needlestick injury to a health care worker.

In these cases a viral load test can exclude an infection when there are symptoms.

Viral load tests are not approved to diagnose HIV. A negative result still needs to be confirmed by an antibody test three months after the risk.

What is the window period for an HIV test?

The window period is time between potential exposure to HIV infection and the point when the test will give an accurate result.

During the window period a person can be infected with HIV and infectious but have a negative HIV test.

Viral load and p24 tests are not accurate for diagnosing early HIV if the results are negative.

An HIV antibody response can be detected as early as two weeks in a few people and in more than 99.9% of people by 12 weeks. An antibody test at 4 weeks will detect 95% of infections.

Antibody testing at 4 weeks can give you a good indication of your HIV status, but you need a test at 12 weeks after the exposure to be considered HIV negative.

What happens when I take an HIV test?

Before taking an HIV test someone at the clinic should explain what is involved. This should include information about the type of test and test accuracy.

Blood samples can be from a pinprick or having blood taken into a test tube.

Oral tests involve rubbing a swab on your gums to collect samples of cells.

Rapid HIV tests can give results in 15—60 minutes, or on the same day.

‘Rapid’ refers to the time taken for the results and not the time since exposure that a test can be used.

If samples are being sent to another lab, results can take a few days or a few weeks.

Rapid blood tests put a pin-prick of blood on a testing strip. This test takes about 15-20 minutes so you can get the results whilst you wait.

Some rapid tests also work on oral samples rather than blood. Although they are sometimes called saliva tests this is not accurate. Oral samples collect cells from the surface of the gums and not saliva. These cells contain HIV antibodies.

When samples are sent to a lab you can either collect your results in person or they will be posted out to you. It is your responsibility to get the results. A few clinics may give results over the phone.

A positive result from a rapid test always needs to be confirmed by a different laboratory test.

How are results reported?

Your test centre should clearly explain the results of your test.

If you have questions that were not explained, or that still worry you, ask the test centre first.

Rapid blood tests show two lines if positive or one line if negative, in a similar way as a pregnancy test (see Figure 1).

Results from laboratory tests are given as negative, positive or indeterminate. 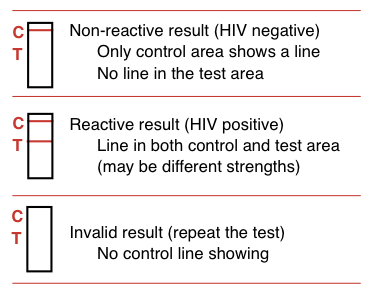 This accuracy has to be considered with the window period.

For example, 4th generation tests will pick up 95% of infections at 28 days after exposure.

A confirmatory test three months after the exposure is always recommended. This is because 5% of people take this long to show a positive result.

When used as a confirmatory test, the western blot result is 100% accurate. (This assumes that there is not a lab error and that it is your sample that has been tested).

Can anything affect the result of my HIV test?

HIV antibody tests are not affected by other circumstances.

This includes infections, medications, most vaccinations, putting on weight, eating or drinking anything before the test, use of alcohol or recreational drugs, mouthwash or time of day.

Your test result is accurate even if you had flu or a cold or are using any medication.

You do not need to fast before your test. Food and drink do not affect the results.

Do I need to take another test?

This will depend on how recent your last exposure was.

HIV tests after the 3 month window are more than 99.97% accurate. They work for all types and subtypes of HIV.

Very few medical tests have 100% accuracy. There will still be rare cases where someone is HIV positive and not picked up.

However, HIV tests are one of the more accurate tests for any medical infection. Tests showing a negative result are ‘interpreted’ as negative.

If the result is negative three months after exposure your result is interpreted as negative. This assumes you have had no further risks.

At this point you can stop worrying. This is the purpose of testing. Learn from the experience you have gone through in taking a test.

Learn about how to protect yourself in the future so you don’t have to go through this stress again. This will enable you to make informed decisions and to look after your sexual health.

If the result is negative four weeks after the exposure, this tells you that you are very likely to be HIV negative. The test after three months will confirm this.

What is a ‘false negative’ test result?

A false negative test result occurs when the test shows negative and the person is really HIV positive.

This is very rare and usually occurs during the window period when people are newly infected but the test can’t quite pick up the infection.

As with other types of tests, there is always be a small margin of error. With antibody-only tests (3rd generation) only 0.3% of tests (3 tests in every 1000) will be a false negative after 3 months.

With 4th generation tests this is even lower. In practice, a negative result after three months means you do not have HIV.

You do not need to test again unless you expose yourself further in the future.

What is a ‘false positive’ test result?

A false positive test is when the test result shows positive but the person is really negative. This can happen with antibody tests when the test picks up antibodies for other infectious agents.

This means that a small percentage of people who test positive on a rapid test (where the results are given within an hour) may turn out to be HIV negative.

A second blood sample will be tested in a lab to look for this.

If your blood test was originally performed in a laboratory, a positive result would have already been confirmed before giving you this result.

All positive laboratory tests in the UK are routinely confirmed using a second type of test called western blot that is 100% accurate.